In the mid-1990s my best friend Scott Woodman began to build guitars, both as a business and as a labor of love. He began by making a few electric guitars for his band-mates Hank Decken and Mark Edgerly. When I say he made them, I don't mean he screwed together some prefab parts from a kit. He carved the bodies and necks by hand, using jigs and saws and clamps that he had also hand-made. As with everything Scott puts his attention to, they were beautiful in every way. They sounded great, they played great, and they looked soooo pretty.

In the Fall of 1997 I decided I wanted one. I had a few ideas about what kind of guitar I wanted, and talked to Scott about some of the details. I wanted something a Stratocaster shape, with neck like "the blue Tele," a gorgeous Telecaster-like guitar he had made, a maple neck with a rosewood fret board. (The blue Tele is now owned by Ttimm, my other best friend, who will probably hold onto it until he dies, which means I'll have to kill him to get it.) And I wanted three pickups, including a bridge humbucker, and the usual five-way switch to select the pickups in various combinations. And floating tremolo bridge for vibrato and dive bombs.

I had one special request: I wanted it to sound somewhat mellower than the usual Stratocaster sound. Stratocasters are generally made with Alder wood, which is part of what gives them their signature brightness. Scott said he could make the body from mahogany, which would probably mellow it out. But in order not to make it too mellow, he could top it with a maple cap. Neither of us could guess how this would turn out, but we were both up for the experiment.

Scott asked, "What about the color? What kind of finish do you want?"

I thought about that for a few minutes, then said, "Think of me, and make it look how you imagine it looking when you think of me."

I visited Maine at Christmastime that year, and asked Scott how the guitar was coming. He said he was still working on the finish. I asked if I could see it, and he said no, not until it was done. I know that Scott often likes to keep his projects under wraps until they're completed, so I shrugged, disappointed, and resigned myself to waiting.

Two days later, the guitar appeared under Ttimm's Christmas tree at our annual silly Christmas party. I opened it up and… it was striking. The cap was not just maple, but curly maple, a figured wood that has a wavy, three-dimensional pattern on its surface. The finish was a mellow brown, edged with a dark, smoky blue-green. I turned it over in my hands, staring at it. When I asked Scott to "think of me," I had no idea what I meant. But he captured it—captured me—perfectly.

Then I noticed the label on the headstock. dale-o-caster. I'm still smiling about that.

It was a while before I could hear the dale-o-caster in its full glory. I flew home the day after Christmas (I was living in Oregon at the time) and Scott shipped it to me. I had a solid-state amplifier, through which the dale-o-caster sounded pretty good. I also had a Chunky TubeCube, a tube amp that made glorious sounds at high volume, and was just kinda okay at low volume. Unfortunately I couldn't get the Chunky up to "glorious" volume without annoying my neighbors, so I played the dale-o-caster through the solid-state amp.

In 2002 I bought a Fender Cyber-Twin amp, plugged in the dale-o-caster, and was floored. Though it could play louder than the Chunky, the Cyber-Twin also sounded very nice at "good neighbor" volumes. And it coaxed all kinds of marvelous colors and nuances from the dale-o-caster and made it sing.

For nearly ten years now I've had this beautiful guitar made with love by my dear friend Scott. I cherish it.

Thank you, Scott, for this wonderful guitar!

Here are some pictures. Click them to see larger images. 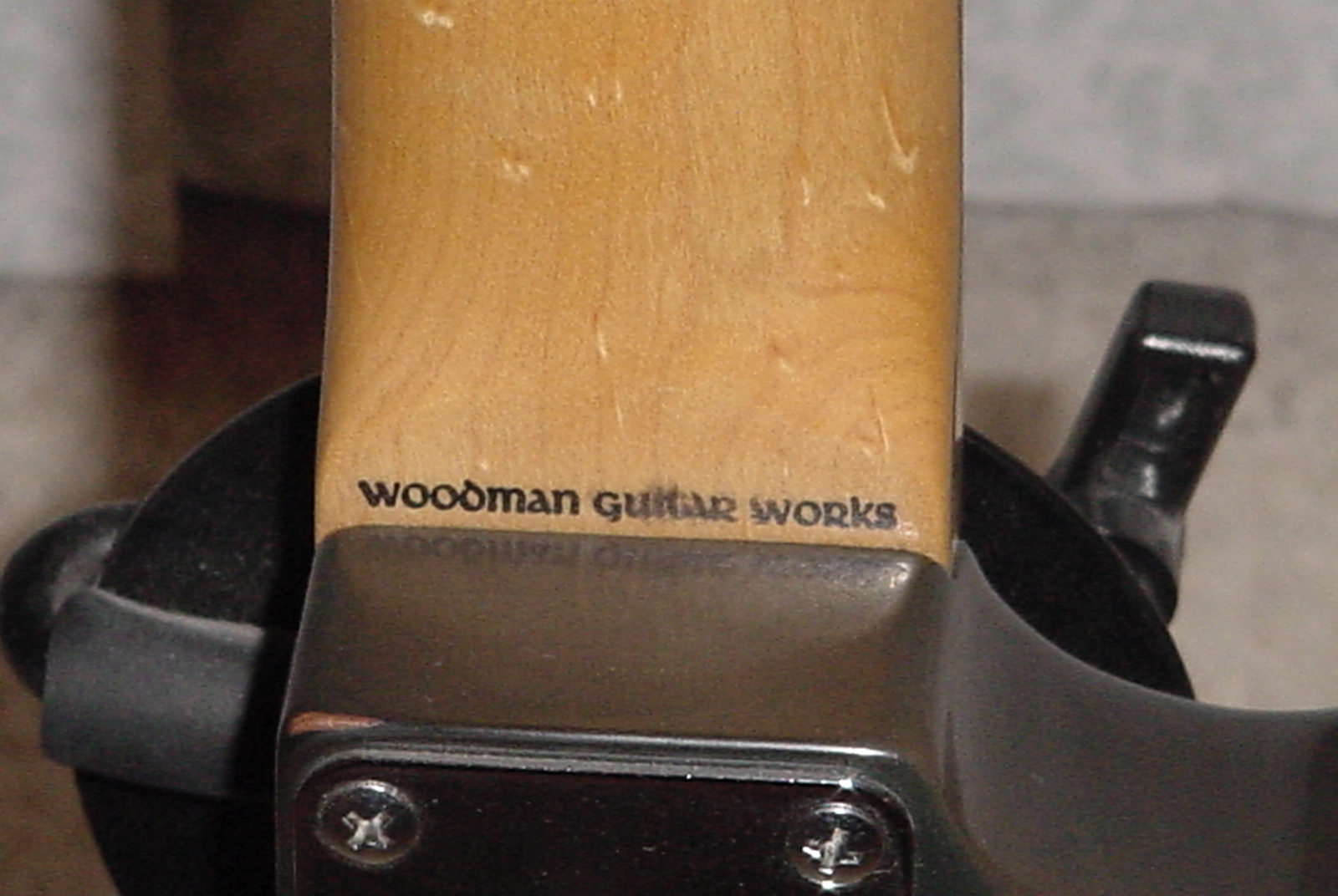 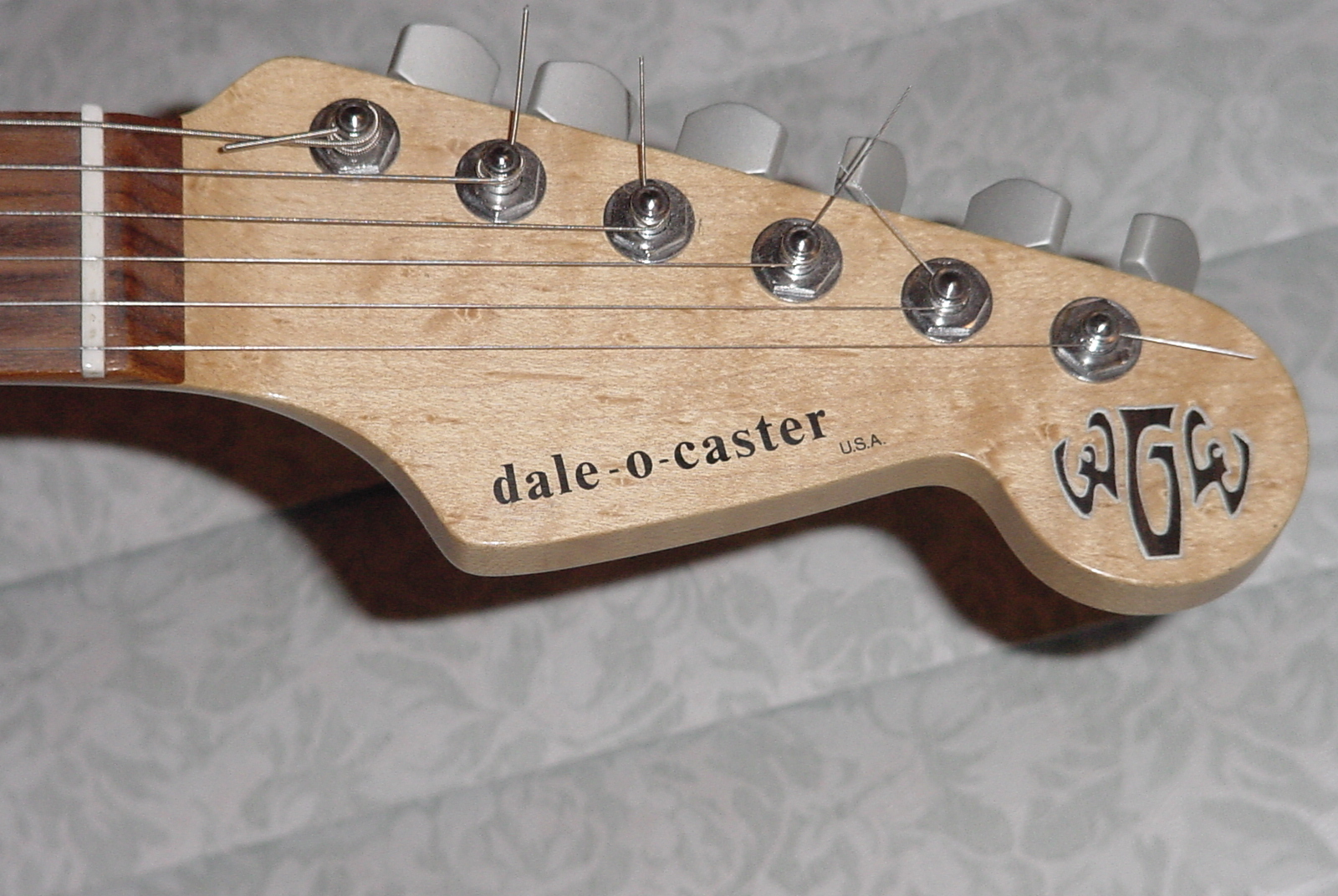