For example, she's become very good at knowing when we're getting ready to take her for a walk. Clearly we're doing something that gives our intentions away. But we don't know what we're doing that she's cuing on. Very clever dog.

Unfortunately, she's also impatient. So as she learns to detect our happy intentions earlier and earlier, the delay increases between when she detects our intentions and when she gets the payoff, she ends up spending more time being frustrated due to her impatient anticipation.

And when Lily is frustrated, she sings. She sings long, weird, beautiful melodies in her little doggie falsetto. And we love listening to her singing. So we learn to give away our happy intentions on purpose, so she'll anticipate, so she'll be frustrated, so she'll sing.

That's surely not what she wants. Stupid dog.

All drugs are performance-enhancing drugs.

I really thought we were going to get through the day unscathed. Even after hearing the early news from Australia — which I admit did keep me awake last night — thought we were probably okay. And then I read Richard's reassuring observations about downtown Sacramento, and things seemed more or less under control. But then…

Okay, look, I'm complaining as if I'm in the thick of it, and I know that's just not fair. When I hear about the devastation in other parts of the world, I'm grateful that I live in Sacramento.

The thing is, I don't know what it is about Sacramento that keeps us safe — relatively safe — from zombies And that's exactly what worries me. I'm hoping it's the heat that keeps them away. Right now it's winter in Australia, and 99 degrees here. And I don't remember the day of last year's attack, but I do know it was in June and I know it was blistering hot here. So that's two data points. Correlation does not equal causation, I know, but that gives me something to hold onto. Whatever makes the attacks relatively mild here, I'm grateful. But if it isn't the heat… then I don't know whether I can count on staying safe, and that's too disturbing to think about.

Last year with the goat wasn't really frightening in and of itself.  Only later, after the animal control guys left, did I understand the full scope of what was happening.

On that day I had slept late, as usual, and I woke up to the sound of something banging in the back yard. I figured Lisa was doing gardening or something. I was too groggy to realize that she would be at work. So I tried to get back to sleep, but I was jolted by a hell of a crash behind the house. Whether that was Lisa or not, it certainly wasn't good.

So I ran to the back door, and there thrashing around in the back yard was a matted, bony, wet-looking nanny goat. I have no idea how it got in our yard, but it couldn't get out. It kept bashing up against the top of the fence, collapsing into a heap, getting up, and jumping again.

I thought I might go out and open the gate so the goat could leave, but it started acting crazy. No longer jumping, but running full speed in random directions and bashing head first into the fence. And it started foaming at the mouth. 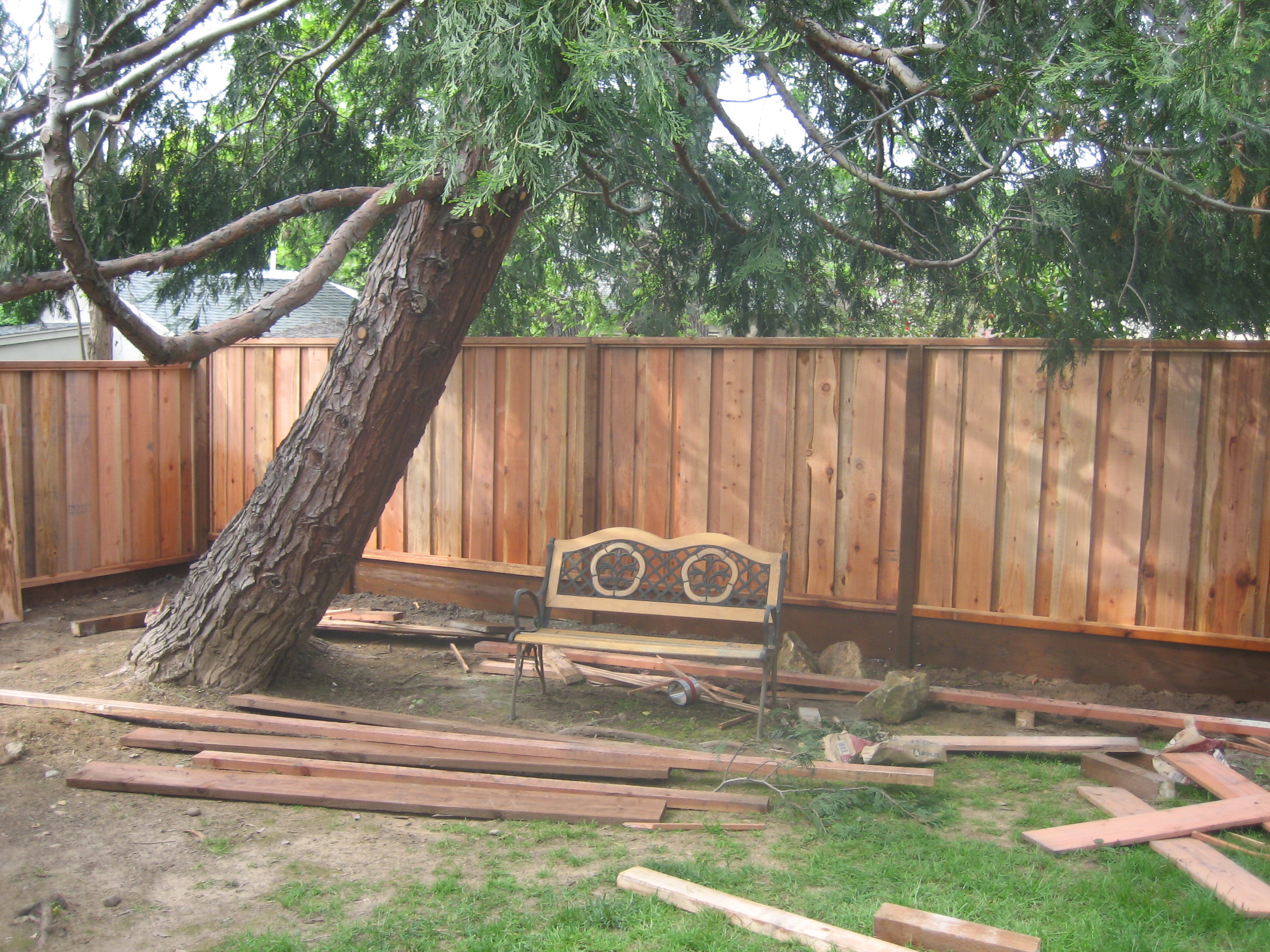 I called animal control, and they said they'd send someone right over. The goat was still bashing against the fence, but by now it had stopped lowering its head. Every time it hit the fence it let out this horrible bleat that — I kid you not — sounded like a human being shouting braaaaaaains. Bashing and bleating, bleating and bashing. At one point it caught its leg in our lovely bench (the photo is from when the fence was being put in), and in trying to free itself it snapped the bench's back legs off.

A truck pulled up outside and these two guys came to the door. I started to ask how they dealt with mad goats, and one of the guys told me to just take them to the animal.

I figured they would corral the thing and take it away to a zoo or a vet or something. But no. The two guys pulled pistols and shot the goat, right there in my back yard. The goat didn't seem to notice the two huge bullet wounds, or (as I now saw) the back leg flopping loosely, broken probably as it extricated itself from the bench. It just kept bashing and bleating.

The animal control guys shot maybe three or four times each before the goat went down, then another few times before it went still.

That was what scared me. At the time I knew nothing about the attacks in Australia, or the rumors of strange happenings in Sacramento. But when these two guys just emptied their pistols into what seemed to me to be nothing more than a trapped goat, I knew something was up.

They put the goat in the back of their truck, cleaned up the blood in the back yard, and left without answering any of my questions. The one guy did tell me it would probably be best if I didn't mention this to anyone.

Later I checked the Sacramento Bee and KCRA web sites, and there seemed to be a complete blackout, not just about the Sacramento attacks, but about any zombie attacks anywhere. Don't believe me? Search their web sites yourself. Not a single word.

Okay, that was last year. This year, as I said, I was feeling reassured from Richard's reports. In fact, the new attacks reminded me that the broken bench was still in the back yard. So I stuffed it into my Prius and took it to the transfer station. I couldn't have been gone more than an hour.

I didn't notice the squirrels at first. I thought the crows were just sipping from the stream of lawn-water that ran down the street from the neighbor's house.

When I got in the house our dog was scrabbling nervously at the back door. So I let her into the back yard. Twenty seconds later she started… I don't now what to call the sound. I first heard it a few years ago when we lived in Cupertino and she saw her first 9" lizard. The screech she let out was mostly fear, I think, but mixed with the usual whine of eagerness she emits when she knows we're going for a walk or a swim.

So this was like that, a mix of fear and eagerness. Big lizard in the back yard maybe?

I wish. I could handle a lizard. But this was just wrong.

Scattered across our back yard were more than a dozen dead squirrels. (I've since counted seventeen.)

The dog was going nuts. She'd approach one to sniff it, then back off and whine. Now, our dog loves to play with squirrels. She used to know how to snatch them off the top of our old wobbly fence, and would catch half a dozen a year. With the new fence she catches only about one a year. And when she does, she doesn't whine. She just licks it and plays with it until it dies. Then she loses interest.

Given all of the blog stuff from around the world, I was pretty sure this had something to do with the zombies. I went and got a garbage bag and a shovel to collect the squirrels.

As I started to slip my shovel under the first one, I noticed something. The top of its head was gone. I looked more closely, and saw that not only was the top of its skull gone, but it's brains were gone, too. 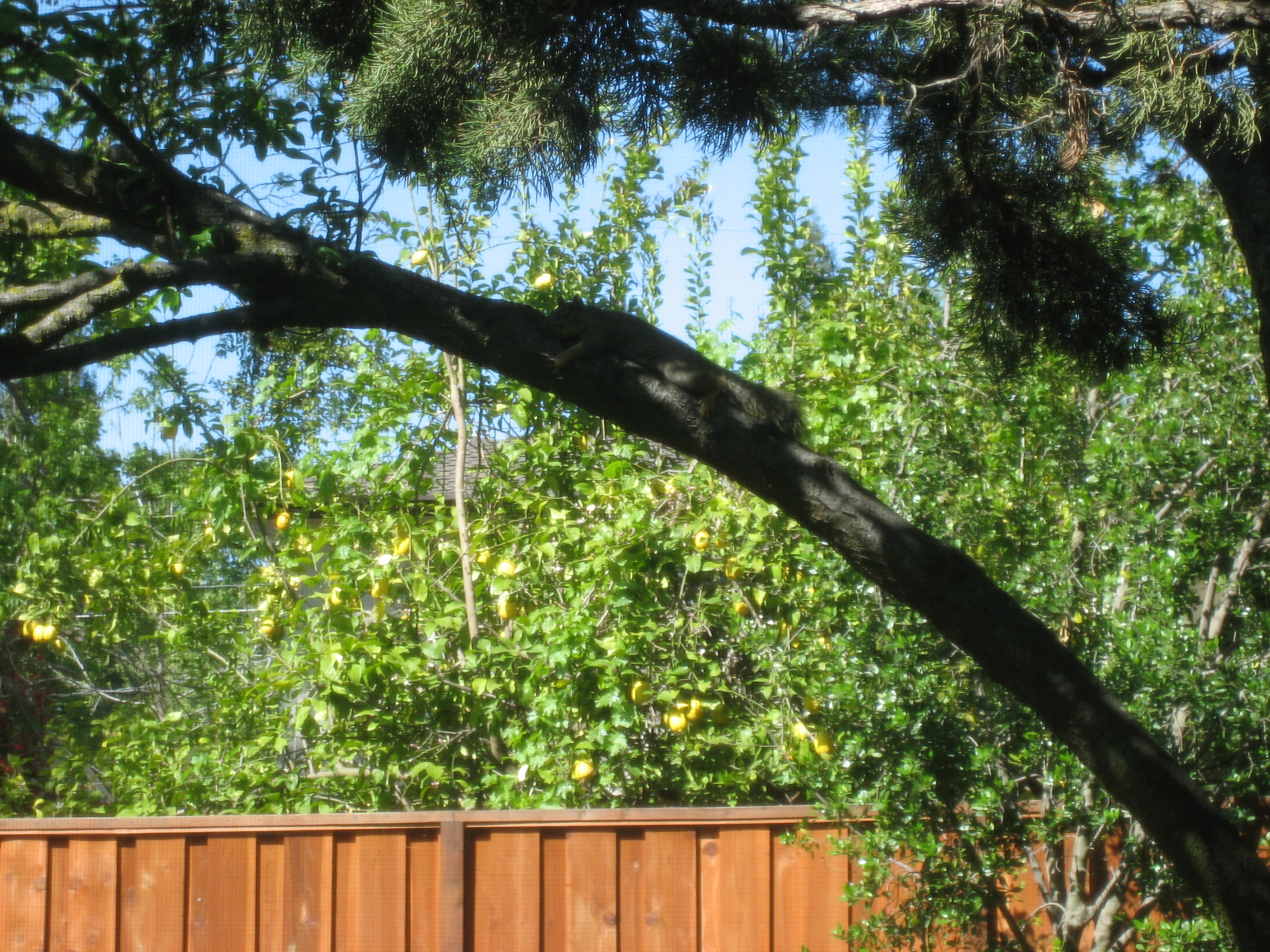 I looked at the other squirrels, and they were all the same. Tops of the heads gone, insides of the heads empty. There was even one (opened and emptied) left on the branch of the tree outside my office window. You can't really see the top of its head in the picture, but trust me that's a good thing. Yes, I do have the gory pictures, and no I won't post them. So, did the zombie climb up on the branch to suck this one's brains, or did it place it so neatly on the branch afterward? Either way, that's creepy.

It turns out the crows weren't drinking water after all. I found five more squirrels in the front yard, as well as three crows mutilated in the same way. The living crows were, mercifully, leaving the dead ones alone. But they were pecking away madly at the squirrels.

Anyway, what the hell do zombies want with squirrels? Crows, yeah, do what you want to them. But squirrels?

I swear I wasn't gone more than an hour! I shudder to think what would have happened if the people down the street had gone off and left their young son home alone (as they have twice in the past few years). And thank goodness our dog was safe.

But I tell you what, I'm not as optimistic about all of this as Richard is. All I see is a stream of sketchy blogs from other parts of the world, a complete news blackout locally, and now attacks on small mammals in my own back yard.

No, I am not at all optimistic about this.

In his plan to break the record for highest skydive (and the records for fastest freefall, longest freefall, and highest altitude reached in a balloon), Michel Fournier has every contingency covered.

Hasn't he ever seen The Wizard of Oz?

A Canadian plan's so-called "progressive licensing" system will break new ground by streamlining the usual requirements for proving that a drug works and is safe before approval.  (New Scientist)

Superimposed on every ocean on the planet there is a striped pattern of currents.  (New Scientist Environment)

L.E. Modesitt asks:  Why do so few F&SF stories take seriously the proposition that life has no intrinsic worth or meaning?

A small but growing number of scientific researchers have begun to post raw experimental results, nascent theories, claims of discovery and draft papers on the Web for others to see and comment on.  (Scientific American)

We judge a decision as moral or immoral based not on what the decision maker knew at the time, but on the subsequent outcome.  (Overcoming Bias)